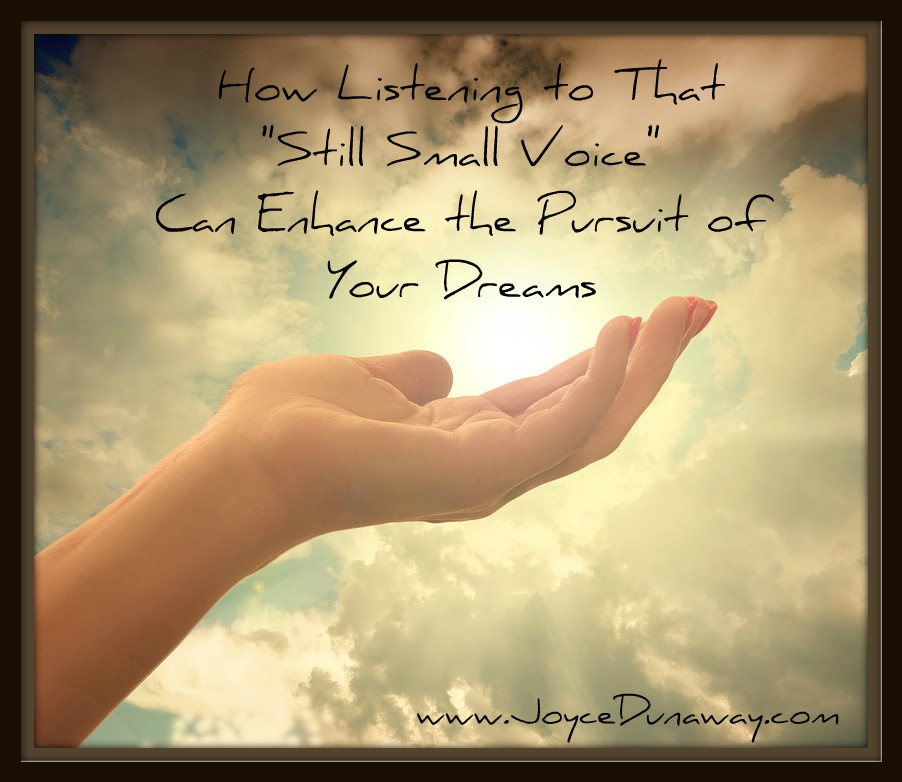 God still speaks us in a still small voice. Sometimes he has to slow us down or do something dramatic to get out attention.

The line was long—too long. My stomach churned. I desperately wanted to get an appointment with a specific editor at the Blue Ridge Mountains Christian Writers’ Conference (BRMCWC). Even before I reached the sign-up sheet, it was announced that the list was full.

Despite disappointment, I rushed to my second choice. To my dismay, she was booked also. What now? I looked at the chart at the back of the room perusing the names of other agents, editors, and authors. I turned around and saw Katy Kauffman sitting at a table. I had never met her, but had read some of her devotions on-line at Arise Daily Devotions.com. God directed me to her table. When I chose an available time, she thanked me.

That night I studied the roster of classes for the conference—so many to choose from. Of course, my main interest was novel writing. BUT GOD guided me to attend Katy’s class the next morning about writing Bible studies. In the remote recesses of my mind, I had considered doing that, but had dismissed it because of the numerous Bible studies by well-known authors.

I attended the class and was enthralled—I felt like I had come home. At the appointment that afternoon, I told her I didn’t know why I was there except that God had told me to come. She shared information with me about the magazine she and her mom publish on-line called Refresh Bible Study Magazine and other books they publish through their website @www.lighthousebiblestudies.com.

After talking to her and attending her classes, God impressed on my heart to write a Bible study and submit it. After returning home, I studied the guidelines and started. I submitted it within a week because of the deadline for their next publication.  Then I played the waiting game—one of the most difficult parts of writing—waiting to see if your submission is accepted.

On Sunday night before the magazine was to be released, I received the message that they wanted to include it in the publication being issued the next day. WOW! I was overjoyed. After some paperwork and back and forth messages, everything was ready.

When I saw the June issue of Refresh Magazine, I was overcome with emotion—how God had worked so fast and had used me—a willing servant. I felt so blessed.

God taught me through this experience that listening to Him and obeying his nudge resulted in inexpressible joy.

Following are some ways that listening to that “still small voice” can enhance the pursuit of your dreams:

God resists the proud, but gives grace to the humble (James 4:6 NKJV).  By being humble and pliable to God’s call, He can accomplish much through us.

Trusting that God knows best, we can proceed step-by-step in following his direction. By accepting challenges to try something new, we often find a hidden side of our creativity which God wants to bring to light.

The emotion I felt when my Bible study was published was overwhelming joy. God had done what I deemed impossible. I was in awe the rest of the day.

As a result of this experience God revealed He has my writing career under His control. My job is to follow his leading and leave the results to Him. I don’t know what the future holds, but I’m looking forward to the adventure.

I would love to hear how listening to God’s “still small voice” has enhanced the pursuit of your dreams. Please share your thoughts in the section below.

Jun 21, 2019 | no comments | Dare to Dream, God Will Provide What You Need to Accomplish Your Dreams, How Listening to That “Still Small Voice” Can Enhance the Pursuit of Your Dreams, Joyce Dunaway